Is it time to call a bottom on bitcoin (BTC)?

That’s not to say this time will be the same, or different.

This tool is used by traders to fine-tune entries to the market, while over-heating (shown in red on the chart) has been regarded as an opportune time to sell.

Another positive indicator is that the Bitcoin Fear & Greed Index has moved from ‘extreme fear’ to ‘fear’. A month ago the index was at 10, but has since jumped to 28.

Another useful tool for gauging where we are in the bitcoin cycle is to measure the BTC price against costs of production.

What is evident from the chart is that the BTC price has seldom strayed too far below the costs of production for an extended period of time.

The chief input costs are electricity and bitcoin mining gear. As the BTC price falls, marginal miners (those whose costs are significantly above the current average of $17 000) will scale back production until prices recover.

This automatic rebalancing of supply and demand was built into the original bitcoin architecture conceived by Satoshi Nakamoto, bitcoin’s founder, and has been an accurate predictor of approximate BTC floor prices over the last decade. 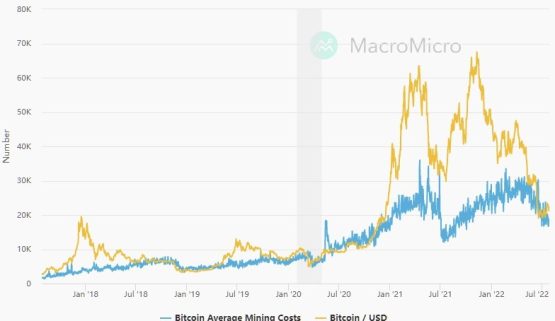 One of the beauties of blockchain technology is the ability to examine data in a multitude of different ways.

Data from blockchain research company Glassnode shows that unrealised losses now account for 55% of bitcoin’s market cap, which is similar to the market bottom of 2018.

Many weak holders of BTC were forced to sell their coins into a falling market, allowing others to purchase them at lower prices. Those that remain are prepared to hold onto their coins regardless of the short-term moves in the BTC price.

Once the weak holders are shaken out of the system, the bull cycle generally starts again.

Another factor weighing over the bitcoin market is the interest rate cycle. As interest rates rise, equities and other risk assets like bitcoin have fallen. Bitcoin has shown a correlation to equities, particularly the Nasdaq, in recent months, though economist Dawie Roodt from The Efficient Group says that correlation is prone to rupture, and BTC cannot be counted on to follow equities for too long.

The correlation between BTC and equities may wax and wane, but bitcoin tends to perform far better in bull cycles. Many purists expect bitcoin to rival and perhaps even surpass fiat currencies like the US dollar and the rand in the years to come because it cannot be inflated beyond 21 million coins in issue.

Listen to Ciaran Ryan’s interview with Dawie Roodt of the Efficient Group: